A 1980s fashion that people may want to forget had to do with their shorts. No it wasn’t necessarily a specific style or fabric, but rather the length itself. In the 1980s, men and women wore shorts that by today’s standard would appear uncomfortably short.

Yes even though women still wear short shorts today, it was really the men that wore short shorts in the 1980s that make it an 80s fashion style many would soon love to leave in the past. I mean who could forget men’s shorts that went almost all the way up the thigh?

In the 1980s it was pretty common to see men wear shorts that showed a good amount of thigh. Whether it be when you were working out, playing sports, or just lounging around, nobody batted an eye in the 80s when men wore these revealing shorts.

Men’s shorts have come a long way since the 1980s. The shape and length of men’s shorts have changed drastically over the years, and it wasn’t until the early 2000s that guys started wearing them longer. But the 1980s was a wild time, and even the most masculine men of the day wore teeny tiny shorts!

Oddly enough, often these short shorts were paired with a crop top, and people still considered it to be very masculine!


A Brief History Of Men’s Shorts

Men’s shorts have existed for hundreds of years, but their history has been vastly different over time.

In the 1800s, men’s shorts were called knickers and were made from heavy cotton or wool. The length was usually just below the knee, and they were loose-fitting around the waist to allow for free movement.

During the Great Depression, men started wearing slimmer shorts due to material shortages. They required less fabric to produce more garments at a lower cost. This style remained popular throughout the 1940s and 1950s, with cargo shorts becoming increasingly popular after World War II.

In the 1980s, men’s shorts were much shorter than today, and their popularity was on the rise. Guys started wearing them to keep cool during the hot summer months, and they quickly became a popular option.

The 1980s was when men’s shorts became shorter than ever before. The shortest we got to see was in 1982 when we got down to only 13-14 inches from the knee. The 1960s and 1970s saw lengths between 18 and 20 inches because there were more casual styles of clothing like jeans and chinos that didn’t require such short shorts. But as trends changed, so did how these clothes looked on people’s legs.

Today men wear shorts in all styles and many fabrics and colors, but in general they tend to be much much longer than they were in the 1980s, typically at least with lengths to the knee.

However in the 1980s, it appeared that the trend was the shorter the better! Luckily this is an 80s fashion trend that seems to have been left in the past, and for most that’s probably a good thing! 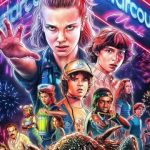 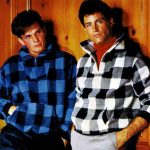