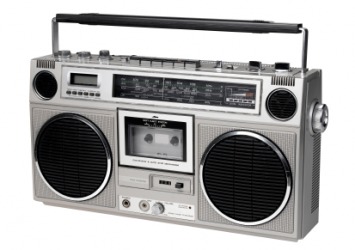 Today, music is already digital and miniaturized. But back in the 1980s, boomboxes were perhaps the most visible form of musical entertainment in the streets.

As the name suggests, these were huge radios with throbbing bases, and they played analog music in the streets everywhere in the US. They had brand names like JVC RC-M90, JVC RC-550, Conion C-100F, Sharp GF-1000, and SANYO MR-X20.

Nobody knows who really created these iconic radios, but Japanese brands began to introduce them to the market in the 1980s. They were huge, because the speakers were designed to really blast the music out loud. That meant a large amplifier, and then a large space for 8 to ten batteries. The bigger the box, the bigger the sound; and that also meant you got a bigger rep in the streets.

Boomboxes In The 80s

Everyone likes music, and portable radios have always been around. But boomboxes were different. Introduced in the 1970s, boomboxes in the 80s were huge monstrosities which played truly loud music in the streets.

Everywhere, young people were gathered around hanging out with their boombox in the background. They even replaced car radios as the preferred method of listening to mobile music. 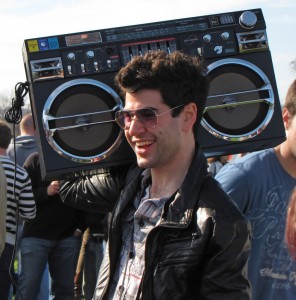 They were a very convenient way of sharing music with all of your friends. They defined your group as your own community, and it connected you to the others through music. This communal feeling isn’t really possible now, since earphones and headsets are already all the rage. Music has become personal instead of communal.

But the history of boomboxes isn’t complete without mentioning 80s rap and hip-hop. In fact, boomboxes were the driving force in street rap. They were used as background when people would break dance in the streets, and young folks spread the sound to every street in the country.

It was so popular in the African-American communities that some people (even black kids themselves) referred to them as “ghetto blasters”.

Say Anything—Ask anyone who actually lived through the 1980s, and this movie which came out just as the decade was winding down showed one of the most romantic scenes in movie (and boombox) history. Who can forget John Cusack lifting a boombox over his head outside his girlfriend’s window, while Peter Gabriel’s “In Your Eyes” blared from the speakers? Today, women who saw that film still have a special place for Lloyd Dobbler in their hearts, and that’s primarily because of the boombox scene.

During the 80s boomboxes were everywhere, but now they are mostly gone. Backlash against the loudness of it resulted in the banning of boomboxes in public transportation, and the introduction of the Walkman (and eventually, MP3s and iPods) meant you can enjoy your music without having to endure a weightlifting session.

Everyone nowadays is listening to music alone. But boomboxes will always have a special place in music and movie history. 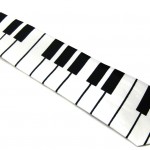 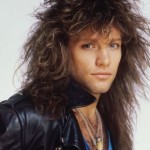