There was so much change taking place in the 1980s, that many new designs and ideas began to flourish. One of those popular trends in the 1980s was Croakies.

These neoprene straps were used to hold your sunglasses in place. Rather than place your sunglasses on the top of your head, or tuck them into the shirt collar, you could just take them off and let them hang by the strap around your neck.

The History Of Croakies

Croakies began in 1977 when patrolman Robbie Fuller, at a ski resort in Wyoming, wanted a retainer that would hold on to his sunglasses regardless of the terrain he had to cross. He wanted something that would provide a very secure grip because he was tired of losing his sunglasses on the slopes.

Fuller began thinking of different ways to hold on to his favorite pair of sunglasses, before settling on a Chinese finger trap-styled design. He then cut up an older wetsuit and stitched the ends so that he could slip them over the temples of his sunglasses.

But, he could not come up with a name for the retainer and was looking for something to call it, similar to a thingamajig. He ended up settling on the name “Croakies”, and soon after they grew in popularity along the slopes.

But like most popular extreme sports apparel, they eventually found their way to the beach. After all, even surfers needed a way to protect their favorite sunglasses when they were riding a wave. The popularity of Croakies grew as demand for casual beachwear increased throughout the early to mid-80s.

One of the most popular pairs of sunglasses in the 1980 were the Ray-Ban Wayfarers. These Ray-Ban Sunglasses had a thicker acetate frame which made them perfect for use with Croakies. Originally designed back in 1952 by Raymond Stegeman, the Wayfarer grew in popularity as a result of 1980s films like The Blues Brothers and Risky Business.

Amazingly “The Blues Brothers” film itself resulted in more than 18,000 pairs of Ray-Ban Wayfarers being sold, which led to negotiations between the manufacturer and a product placement company in Burbank California. Through this deal, Ray-Bans began to appear in various television shows and movies throughout the mid-1980s.

In all, the popular sunglasses appeared in more than 60 television shows or movies every single year. After the placement of wayfarers in the 1983 film, Risky Business, more than 350,000 pairs were sold. And Croakies were there to keep these hip new sunglasses from falling off your face.

Despite being a popular fashion in the 1980s, sadly Croakies seemed to be one of those fashion accessories left in the dumpster of history with a myriad of other 80s fashion trends.

The biggest downfall of Croakies was that they were specifically designed for larger acetate frames. While the Ray-Ban wayfarers were very popular at the time, some people also preferred wearing wireframe sunglasses. As result, the Croakies simply would not fit properly and the sunglasses would easily slip out of their grip.

Nevertheless, people who preferred wearing wireframe sunglasses still had the old-school option of a traditional retainer. These nylon cord retainers came in a variety of fluorescent colors, with a rubber loop at the ends to grip the frame.

Because they were designed more specifically for use with reading glasses, they easily fit most wireframe sunglasses. However, the rubber loops provided nowhere near as much grip as the neoprene used in Croakies. 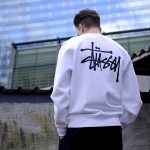 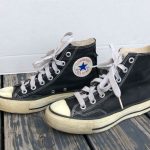