The 80s was a time when fashion was all about being unique, and nothing was more unique than Fiorucci.

In fact, this Italian clothing company became one of the most popular clothing brands of the 80s because it created an iconic style that could be seen in celebrities like Madonna and Robert Redford.

However, its popularity didn’t happen overnight, so what made Fiorucci such a hit with consumers? Let’s take a look at how this brand became so popular.

If you were a person with good fashion taste in the 1980s, chances are you owned some Fiorucci clothes.

The company actually was founded in 1967 by fashion visionary Elio Fiorucci, and the brand was known for its designs that integrated fashion, art, and music into a truly unique clothing line that was perfect for the eclectic essence of 80s fashion.

While other jeans companies like Guess marketed an almost elitist image, Fiorucci marketed itself more inline with pop culture at the time with the goal of creating a brand that was fun and accessible to the masses.

To get an idea of the brand’s style, here is a news segment done in 1984 on the New York City Fiorucci store:


In the 1980s, Fiorucci was known for its products and its advertising campaigns. It was notably a direct competitor of Levi’s which by then had become a popular brand. They were competitors in the jeans market, and the 1980s was really the start of jeans culture with other companies like Guess Jeans and Jordache Jeans among other popular brands at the time.

Fiorucci was also a frequent choice among celebrities in the 1980s that also furthered it popularity at the time. Fashion icons like Madonna and Farrah Fawcett were all fans of the brand, and their seal of approval meant Fiorucci was clothing that was hip and cool.

Fiorucci as a brand was very eclectic, and even the store employees they hired were essentially brand ambassadors to the Fiorucci movement. Fiorucci often hired colorful characters to man its stores, and this also helped further popularize the brand during the 1980s.

Fiorucci’s flagship store in Manhattan was a must-visit shopping destination for celebrities and fashionistas alike.

The late Princess Diana visited the store multiple times throughout her life and even modeled one of their outfits at a charity event she attended in 1985.

The New York City store was known to cause quite a scene, and the events there were just as outrageous as the fashion:

The company also used a number of other ways to advertise its products. For example, they made music videos with their clothing and models, but they were most well-known for their print ads. These were often colorful and “artsy”, and it these ad campaigns really encapsulated what the brand was about.

They also put up billboards around cities like Milan and New York City.

In addition to these advertising methods, another key factor in the success of Fiorucci was its use of celebrities as spokespeople for its brand. Huge stars like Madonna and Elizabeth Taylor were paid tens of thousands of dollars per day to wear Fiorucci clothing and walk down runways at fashion shows across the globe.

With these kinds of endorsements, it’s no wonder that many people wanted to buy this particular brand!

If you owned a pair of Levi’s jeans in the 1980s, chances are they were either ripped or torn. The brand was so popular at the time that it wasn’t unusual for kids to wear their jeans until they literally fell apart at the seams. This is when Fiorucci came into play.

Fiorucci had the same look as Levi’s but cost half as much and didn’t have to be replaced as often (if ever). They were made from cotton and were very tight-fitting, which meant they showed off your body—and hey, who doesn’t want to show off their body?

Its jeans were ultra-tight and made it easy to show off your form.

The 1980s were a time when people were obsessed with jeans. Pop stars and celebrities were often photographed in them, especially in tight-fitting bootcut jeans that showed off the wearer’s form.

Fiorucci’s clothing line was no exception—it focused on ultra-tight jeans for men and women, which made them particularly popular among young adults who wanted to wear trendy clothes that did not look like they came from the 1950s or 1960s (which was the case with many other popular clothing lines at the time).

The popularity of Fiorucci waned and eventually fizzled by the late 1980s. The company was sold multiple times throughout the 1990s and had its fair share of business failures. Elio Fiorucci also passed away at the age of 80 in 2015, which seemingly signaled the end of the brand. However Fiorucci was re-launched in 2017, and continues to make clothes in the Fiorucci tradition.

If you grew up in the 1980s and were a fashionista, undoubtedly you will have fond memories of the brand. Perhaps you were lucky enough to visit one of their flagship stores, or perhaps just admired the fashion and style. Regardless when we look back at the epic fashion of the 1980s, Fiorucci will always be a brand that will be close to our hearts. 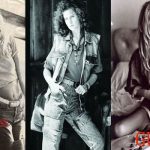 The Rise Of Guess Clothing In The 1980s