One of the more unique fads of the 1980s was pegged jeans (or cuffed jeans). It was so popular, that most teens could not leave their homes until their jeans were properly pegged. It was an art form to properly fold and roll the jeans, that many could not master.

Pegged Jeans In The 80s

So why were pegged jeans so popular in the 1980s?

To better understand the fashion, we need to go back to its origins as well as the various fashion uses for pegged jeans that made such a style an essential one.

The Days Of The Zoot Suit

The idea of pegged jeans goes back to the 1940s when zoot suits were all the rage. It was common for workers to cuff the leg of their jeans to prevent them from getting dirty while working.

It was a time when fabric was expensive, and zoot suits were a form of protest against the rationing of fabric. But whether you were working on a job, or hanging out in the club, it was important to properly fold and roll the cuff at the ankle in order to prevent the fabric from dragging on the ground.

It was commonplace for most kids to change the laces in their shoes immediately after they were purchased. In fact, kids would beg their parents for several sets of neon-colored laces to go with their shoes. There were countless ways that you could lace up a set of sneakers with the right set of shoelaces. Lacing up with two different colored neon laces was all the rage.


A properly pegged pair of jeans started with a fold that tightened the cuff around the ankle. This fold could then be rolled over once to lock it in place, and then rolled over a second time to ensure that it would not slip out during the day. Depending on how long the pant legs were, you could potentially do a third roll without exposing too much of your ankles. When done, both legs should be the same exact height above the ankles and the rolls should be equal widths.

To make life easier, girls could purchase pre-pegged jeans. These jeans were specifically designed to be folded over. While some of them featured snaps or buttons to help with the process of folding, virtually all pre-pegged jeans featured a different fabric on the inside of the cuff that would be exposed once it was rolled up.

Pegged jeans are still popular today, and you can see them everywhere you go. However they may not be as ubiquitous as they were in the 80s, but the trend is still around today because of its practicality. 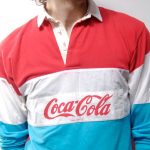 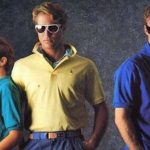