Beaded jewelry is a staple in today’s fashion trends but its massive boom in popularity occurred in the 80s. Pop icons of the day like Madonna and Cyndi Lauper often sported beaded jewelry, and whether it was bracelets or necklaces, it was out there adorning the big and bold fashion of the 1980s.

Made from all kinds of materials, from pearls to gold, to plastic, resin, and more, men and women during this era experimented with beaded jewelry in all shapes and sizes. So why was it a fashion trend during the 1980s?

A Form Of Self-Expression

Fashion in the 80s became bolder and brighter as compared to the previous decade’s folksy and discotheque trends. More and more men and women were embracing their individuality, and standing out meant wearing clothes and jewelry that were different from the rest.

Bold and neon colored clothing was in. Styles like animal prints, spandex everything, and big accessories were the norm. The 1980s were about self-expression and beaded jewelry allowed you to do just that.

To match the zeitgeist of the 80s, beaded jewelry was a way for people to adorn themselves without having to spend too much. While pearl necklaces and bracelets were popular, they were often too expensive for the average worker. And thus, faux pearl beaded jewelry became popular, as well as faux precious metals, and other costume jewelry that could be purchased from a simple catalog or department store.

Adorning oneself with jewelry was no longer an exclusive privilege of the rich and able, but even students and your average employee could wear heaps and heaps of accessories without spending too much.

Self-expression was big in the 80s, and beaded jewelry along with other cheaper accessories like jelly bracelets was a simple way for people to express their personalities and stand out in the crowd without breaking the bank.

Just like many of the other fashion trends of the 1980s, beaded jewelry grew in popularity because of the number of celebrities that wore them. Singers like Madonna and Cyndi Lauper in particular often performed with them on, and even men like Steven Tyler of Aerosmith wore beaded jewelry as well.

Beaded jewelry was a way that celebrities (and regular folk) could add an element of chaos to their outfits, often wearing multiple kinds of beaded jewelry at the same time as a subtle way to break away from society norms.

With the boom of fashion self-expression, jewelry designers were no longer limited to precious metals, gemstones, and pearls to make their products. With more and more themes and styles coming up in fashion, designers had to innovate and experiment with different materials, and using beads was one way of creating more designs without spending too much.

Designers began using plastic, resin, wood, shell, and other materials to make jewelry, as well as making their products available to a broader and bigger market.

Jewelry was no longer limited to being worn during special occasions or formal events, but the average individual could wear beaded jewelry every day, and often wearing them in multiple layers at a reasonable cost to boot.

Women in the 70s were restricted from owning credit cards or bank accounts but this changed in the 80s. With women having more control of their finances and with the popularity of self-expression, there was a rise in demand for costume jewelry during the decade.

As more women joined the workforce in the 80s, they had larger purchasing power that allowed them to buy what they wanted, and beaded jewelry was a simple and inexpensive way to pamper themselves without spending too much.

An Overflow Of The 1970s DIY Movement

If men and women weren’t buying beaded jewelry, they were busy making them. More materials became readily available in the 80s, and this meant more people had access to beads they could make into jewelry on their own.

These DIY beaded jewelry mostly made up of plastic were available in big bright colors, as well as different shapes, and various charms. And with a few plastic beads, one could make multiple necklaces and bracelets, and you could pile them all on top of each other for a maximalist style that was the trend in the decade.

Beaded jewelry became popular in the 80s because it was bright, colorful, beautiful, and a simple way to express oneself. They were also inexpensive and readily available, giving men and women in the 80s instant access to fashion trends that made them stand out.

Even though they were a popular 80s fashion trend, we still do see quite a bit of beaded jewelry even today. It is one of those timeless fashion accessories that have been around for hundreds of years, and we don’t expect them to leave any time soon. 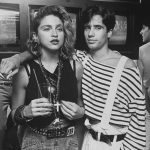 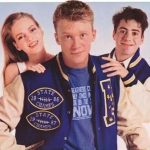