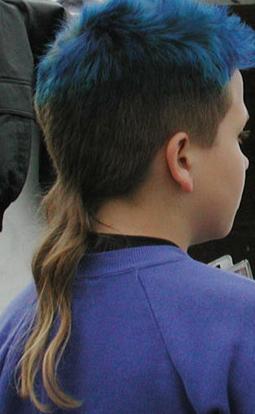 As well as big hair, mullets and pony tails, rats tails were a common phenomenon during the 1980’s. The rat tail haircut style was popular predominantly among teenage boys and young men who wanted a slightly different look.

Sometimes rat tails would simply hang down from the back of the head, but occasionally they would have been plaited styled as a dreadlock, or even curled or permed. It wasn’t uncommon for men to grow more than one rat tail.

From Pony Tails To Rats Tails

What’s more is you could easily do a lot more with a rats tail than you could with a pony tail. They were easier to dye, easier to decorate and occasionally they looked better than bigger pony tails.

Movie stars and pop stars were often seen to be sporting the rat tail haircut, but on occasions they were false rats tails, which gave rise to false rats tails being made and bought worldwide. If you wanted rats tails but you didn’t have the patience to grow one then you could get to a store that sold them and achieve the look you wanted, very quickly. 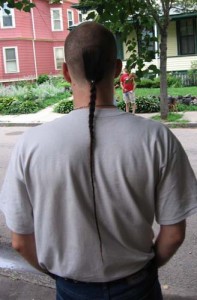 During the 1980’s, some punks grew rats tails, and some could even be seem with a completely shaved head, with a rats tail growing out the back. This tail may well have been dyed in a luminous color and made to stand out. But it wasn’t just punks who were more than happy to sport rats tails, it was also those who wanted to be fashionable and remain that way. It was those who wanted to make a statement and look cool.

Students would occasionally be sent home for having a rats tail, after being told to cut it off. Indeed, this hair style was not always popular in the workplace, but it was so much easier to hide or disguise than a pony tail was.

During the 1990’s some men grew rats tails, but as newer hairstyles came into fashion, they were chopped off and shunned for another style that was perhaps a little more acceptable.

Rats tails are not as popular as they used to be, and you would have to look hard to find a man, or a woman with one, but they can still be found. In some parts of Australia and New Zealand it’s still quite a popular hairstyle, but in the western world, it’s one that perhaps for now will remain in the 80’s until it’s considered to be the style to have once more.