Leotards grew in popularity during the early 1980s as a result of the fitness and aerobics craze. During the early 80s, Jane Fonda released her first workout video, and going to the gym was also quickly becoming a popular and fun way of staying more active.

Although leotards reached the height of their popularity in the 1980s, they had originally become popular during the early 1970s. It was an easy way for someone to add a little bit of color as well as texture to their look. Leotards were also comfortable and functional fashion, which again helped their popularity as a choice for workouts.

The availability of leotards was boosted by the many advancements in synthetic fiber manufacturing techniques throughout the 70s. And by the end of the decade, they were available in a wide variety of shiny spandex styles, which perfectly fit the form of the wearer. And their wide availability in affordable styles and colors led to their explosion in popularity during the 1980s.

Leotards In The 80s

The aerobics craze began in the early 1980s, and from its very beginning leotards were one of the most popular choices when it came to 80s workout fashion. Fueling the aerobics craze were television shows as well as movies like Staying Alive and Fame.

It was commonplace to see women going to the gym wearing a leotard and matching tights, legwarmers, and neon headbands. By the mid-1980s, leotards had transcended from being worn purely during workouts, to casual wear as well.

After she broke her leg, she sought out the assistance of an easy-to-follow workout regimen, the resulting routines were integrated into her aerobic videos and showed how women could get fit without ever leaving home. These videos were very popular, but they also skyrocketed the popularity of leotards as a workout fashion.

The following year in 1983, the popular movie Flashdance was released. Jennifer Beals, the starring actress in the film was a young dancer who wanted to become a professional ballerina.

Throughout the film, the common theme was dancing and the number one outfit was the leotard. The film was so popular that many of the dance sequences used throughout the movie influenced other 1980s films such as Purple Rain, Footloose, and Top Gun.

By the end of the 1980s, the aerobics craze was still going strong. It was 1987 when the romantic drama Dirty Dancing was released on the big screen. The film starred Jennifer Grey and Patrick Swayze, and it follows the tale of Frances Houseman, who is a young woman that falls in love with her dance instructor while on vacation.

Her father who was a doctor attended to one of the other employees at the resort who had undergone a botched abortion. In order to protect his “baby” from a similar fate, he forbade her from seeing Patrick Swayze, but she had a mind of her own and snuck out.

Throughout the film, Jennifer Grey was seen sporting a pink leotard with cutoffs, which was a very popular style for girls throughout the late 1980s.

These days leotards tend to be limited to the ballet and dancers. It isn’t even seen much in workout fashion which was the primary place people wore leotards to in the 1980s.

Though leotards aren’t as popular as they once were, we will always remember them as that funky workout fashion from our youth. Maybe one day they will make a return as some retro fashions do, however we feel that leotards are probably one of those fashion trends that will forever remain in the 1980s. 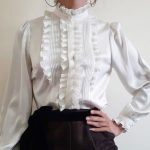 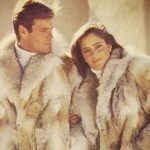