On Friday, Netflix released the much anticipated Volume I of Stranger Things Season 4. If you’re not familiar with the series (do you live under a rock?) it follows a group of misfit teenagers as they battle to save the world from demons from a parallel dimension known as “The Upside Down”.

The series takes place during the 1980s in the fictional town of Hawkins, Indiana, and it is loaded with nostalgia for us “older kids”. The series is amazing on its own, but for those of us who actually lived through the time, the details the show puts in to get the decade right makes it that much more enjoyable.

If you grew up in the 80s, you’ll appreciate the way Stranger Things has seamlessly woven the fashion of the era into each scene. All too often costume designers get it wrong, but the ones that work on Stranger Things absolutely nail it!

The costume designers at Stranger Things have definitely did their research when it came to the fashion of the 1980s seen in the show.

Here are some of the subtle nods to 80s fashion we appreciate in the hit Netflix series:

The 80s was a time of bright and bold colors, and Stranger Things hits the mark when it comes to the 80s neon fashion trend of the time. We often see the main characters of the show sporting bright neon colors like yellow, turquoise, and purple.

There is no shortage of bright colors (and designs) in the show, and anyone who lived through the 80s will fondly remember this colorful era of fashion.

Another 80s fashion trend that we see pop up in the show is the use of “tartan cloth” or better known as just “plaid” clothing. Just about every character at some point on the show can be seen wearing plaid clothing.

Plaid was a popular fashion during the 1980s, and we are glad to see it resurrected in Stranger Things!

Denim jackets was a big fashion trend in the 1980s, and we also see a ton of denim clothing in general throughout Stranger Things.

We still wear denim today, but the denim jacket is a fashion trend that seems to have fizzled out over the years. So it was nice to see Stranger Things bring back this popular, yet often forgotten 80s fashion trend.

We really see Stranger Things bring the “Letterman Jacket” to the forefront in Season 4. The first few episodes of volume 1 focuses on the death of cheerleader Chrissy Cunningham, and how Jason Carver and the rest of the basketball team try to hunt down her alleged killer.

We see the team often wearing Letterman Jackets which was a popular 1980s trends among high school jocks. The jacket was popular because it let others know you were a jock and part of the “cool kids”, and often they would be worn daily as a status symbol.

Another fashion trend that was popular during the 1980s were Members Only Jackets. These jackets were fashionable yet rebellious, and they were a 1980s fashion staple.

We see Steve Harrington rocking the iconic 80s brand in one of the earlier seasons of Stranger Things.

Here are some noteworthy 80s fashion accessories we have seen so far:

Trucker hats were popular during the 80s because they kept your head cool and looked great at the same time. They often had logos of your favorite companies, sports teams, or just some cool slogan on them.

If you didn’t have time to do your hair, you could also simply pop on a trucker hat and get on with your day. It was great fashion that was also functional.

And thanks to Dustin Henderson, there is no shortage of Trucker Hats fashion in Stranger Things.

Just like Trucker Hats, Scrunchies were a quick and stylish way for women to manage their hair.

Scrunchies were basically hair ties wrapped with some cloth material, and they often came in bright colors which of course was fashionable in the 80s.

We often see the girls in Stranger Things wearing scrunchies. It’s a subtle but appreciated nod to 80s fashion in the show.

Though we can’t confirm for sure, it appears that the popular 80s fashion trend of rocking Ray-Ban Sunglasses has also made an appearance in Stranger Things.

Ray-Ban Wayfarers and Aviator style sunglasses were made popular by Tom Cruise during the 1980s. The Hollywood A-Lister wore those iconic styles of sunglasses in his movies “Risky Business” and “Top Gun” respectively.

In Stranger Things it appears that Steve Harrington and Billy Hargrove also love these sunglasses, or at least sunglasses that are an homage to these iconic shades.

Of course we couldn’t forget all of the 80s hairstyles that are on the show.

Though the younger generation watching may not realize it, the quirky hairdos of Stranger Things are actually spot on when it comes to the hairstyles of the 1980s.

So let’s take a look at some of the show’s most epic hairstyles:

The mullet in all its 80s glory can be seen throughout the show. Though it may seem goofy today, this hairstyle was made popular during the 80s by celebrities like Patrick Swayze and Rob Lowe who were considered sex symbols at the time.

Steve Harrington, Billy Hargrove, and Mike Wheeler all sport the 80s mullet in the show, and it’s wonderful to see.

The perm hairstyle was all the rage during the 80s, and arguably one of the most memorable of the era. Celebrities like Cher, Sarah Jessica Parker, Meg Ryan and Barbara Streisand were just a few of the many famous women that rocked the style.

In Stranger Things we see Natalia Dyer’s character “Nancy Wheeler” sporting this hairstyle throughout the show.

Stars like Patrick Ewing, Scottie Pippen, and Will Smith were all notable wearers of the hairstyle.

In Stranger Things we see Lucas Sinclair rocking the high top fade as a throwback to the 80s.

Of course we couldn’t leave out a discussion on 80s hair without highlighting the 80s Bangs hairstyle that’s featured in the show. This hairstyle is basically like it sounds, where one’s bangs are prominently featured covering much of the forehead.

So those are just some of the most popular 80s fashion trends that we noticed in Netflix’s Stranger Things, and we must say that we have been thoroughly impressed!

The younger generation watching the show may not notice them, but every time one of us 80s kids sees a throwback fashion from our childhood, it definitely gives us that warm and fuzzy feeling inside.

It’s crazy to think that the 1980s ended more than three decades ago, but it’s nice to see a hit show like Stranger Things paying homage, and doing it well, to what some of us believe was the best decade ever. 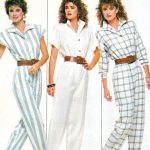 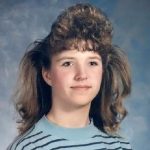