When it comes to 80s fashion Madonna is undoubtedly near the top of who people think about that era of style. Not only was she the biggest female pop star in the world, her iconic looks are still admired many decades later. The material girl not only topped the music charts but also the fashion world as well.

Even though Madonna had so many fabulous looks during the 1980s, there were some fashion trends of hers that remained constant that those who followed her will recognize.

Whether you are looking for a great Madonna costume or just want to learn more about her iconic fashion sense, here we break down some of her most popular 80s looks:

Arguably the most notable feature of Madonna’s look is her hairstyle. Throughout the 1980s she sported your typical short frizzy perm that was all the rage. No doubt loaded up with hairspray like Aqua Net that was popular at the time, remember the 1980s was all about big hair, and Madonna was no different!

Furthermore she often wore some sort of bow or scrunchie in her hair which was also a fashionable thing to do in the 80s. They were also often brightly colored which was of course the trend during the 1980s.

As you know Madonna had a punk fashion look that was popular during the 1980s, and this was often seen in the tops that she would wear. Often they were mesh tops, but she also wore her fair share of leopard print and leather as well. She also pushed the envelope with low cut tops which during the 1980s was still considered taboo, but the queen of pop always liked to wow her critics!

Of course we shouldn’t forget some of her more provocative and colorful looks as well. After all it was the 80s, and the decade was about pushing the envelope of style and sexuality.

For the most part Madonna often sported what young women of the day wore during the 80s including denim jeans, both long or short. She did also wear some mini skirts, however those often were worn over jeans or capris pants. They weren’t as loud as the rest of her outfit, and they served both function and style.

Of course no 80s Madonna outfit would be complete without the right accessories, and 1980s fashion was all about having the right ones!

Typical of the time were huge earrings along with jelly bracelets. As stated previously usually Madonna wore some sort of bow or scrunchie in her hair.

Finally we can’t forget the makeup. Notice the often over accented eye makeup and glitter makeup which was very popular during the 1980s. Madonna often went with bold 80s makeup trends that were colorful, yet subtle, which was a trademark look for the material girl in terms of her makeup choices.

Madonna In The 80s

One of Madonna’s earliest and most memorable 80s looks was her (at the time) controversial white outfit for the 1984 MTV VMAs. She was set to perform her hit “Like A Virgin”, and her sexy modified white wedding gown let the world know that she was here and the music world would never be the same!

Her white lace gown and long fingerless gloves, combined with a plethora of pearls, “boy toy” belt buckle, and her signature cross necklace, opened up the inaugural MTV VMAs with a bang! Here’s a video of the outfit to give you a better feel of the look:

In 1985 Madonna stunned the fashion world again with a sexy black outfit for the 1985 American Music Awards.

Her revealing black corset dress combined with black fingerless gloves, layered pearl necklaces and crucifixes, made her a standout and really the only thing people remembered from that award show. Her signature 80s side ponytail hairstyle completed the outfit by giving her a playful yet sexy look.

Aside from music award shows, Madonna was making fashion statements in 80s movies as well. Her outfit from “Desperately Seeking Susan” (1985) is an iconic look that showcased a more casual and playful side of the singer.

Her custom tuxedo jacket draped over her low-cut black top and black pants, combined of course with signature layered accessories like pearl necklaces and bangle bracelets makes this look quintessentially 80s. Of course a black bow and a good pair of Ray-Ban sunglasses completed this iconic outfit, and it’s one of her most memorable looks from that era.

So there you have it the breakdown of Madonna’s most popular looks from the 1980s. She was (and still is) a fashion icon, but many of us who grew up in the 1980s will always consider her not just the queen of pop, but also fashion as well. So if you’re feeling a bit edgy, definitely consider giving some of the Material Girl’s looks a try! 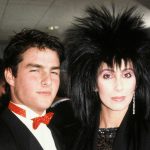 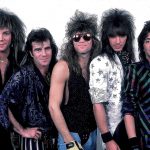